So when I was much younger I used various keyboard layouts ranging from the ZX81, Spectrum through the Apple //e ending up with an XT keyboard that was in a Danish / US layout (I used the US layout) followed by some AT keyboards this means I tend to like the older AT keyboard layout with 84 keys.

Now the original AT design has some advantages where the control key is next to diamond used for wordstar (which the early Borland Turbo C and Pascal editors used), but that hasn’t been fashionable for many years. 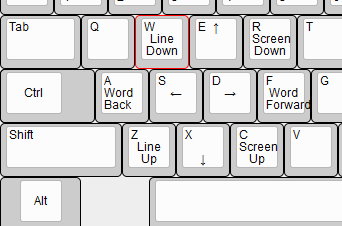 So I started playing around with keyboard layout editor which comes with some pre-canned designs aiming to get a new design for my own personal use loosely based on the AT keyboard layout.

I did wonder about swapping caps lock and control back again but I’m not sure my muscle memory could quite cope (at the time of writing I think have all the key caps needed).

Now the Wordstar keyboard diamond got me thinking about one of the most influential layouts ever, the LSI ADM3A terminal.

The ADM3A is famous for a couple of reasons, the marked HJKL arrow keys which live on in vi, and the HOME legend in the top right over the ~ (tilde) which is why on Unix system ~ is the the users home directory. The other interesting thing is the ADM3A is made of TTL parts and has a keyboard where the shifted characters follow the ASCII codes. So if Control is held down then the bits 5, 6 (bit 7 is zero anyway) of the output are forced to zero to get the control characters, if Shift is held down then for characters in the range (0x40-0x5f @,A-Z etc) bit 6 is set high and for characters in the range (0x30-0x3f 0-9 etc) bit 4 is cleared to zero. I suspect that Shift-zero would produce a space. One reason for it’s popularity was it also had the ability to move the cursor to a row and column and I suspect it was one of the cheaper video terminals at the time. There is a later version but that looks like it has a microprocessor inside it judging by the manual.

I did consider building a minimalist keyboard with the ADM3A layout as well but getting hold of key caps would be a pain.

Inspired by the Reddit keyboard building guide I did some more playing around with keyboard layout editor and using the swillkb case builder did check to see how much it would be to build this AT inspired layout.

Probably a bit too expensive to make and rather a lot of work to get cut, although there are a couple of companies near me who have cutters to possibly make this work.