During lockdown I decided to build myself a new PC, so with a bit of help from PcPartPicker I put together a system.

The final specification I ended up with is a Ryzen 3600 with 64GB of Crucial Ballistix RAM running with XMP settings of 3600, a 500GB Samsung SSD and a Radeon RX580 video card all hosted on a MSI B550M PRO-VDH WiFi board.

Monitors are a pair of Samsung 4K monitors only capable of 60Hz.

The whole thing is in a Thermaltake Core V21 mATX cube case with a SeaSonic Focus 650W PSU. 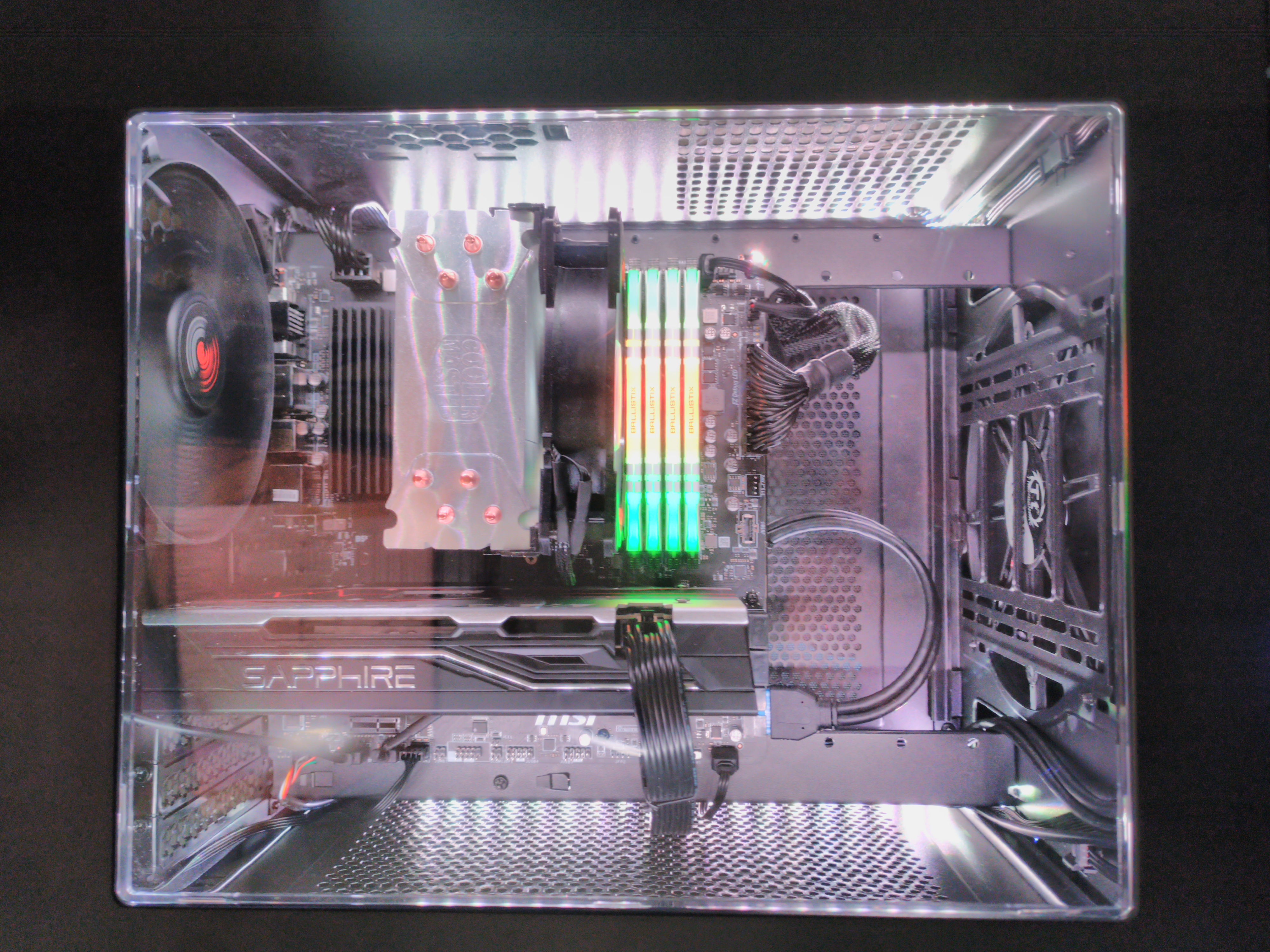 Memory
First I bought some Corsair Vengeance memory which ran with an XMP overclock of 3200, the problem is that I really should have checked the QVL list for the board, while this memory is fine with two sticks of RAM once you go to four the whole thing became unstable. I tried messing around with timings but I couldn’t get the system to be stable at a higher clock speed than 3000. Also don’t buy your memory in two different purchases, it might have the same part number but in my case I had different dies.
PSU
I originally bought a Aerocool Strike-X 1100 as it was on special offer. It would power off when light switches were turned off and on. Fixed by replacing it with a SeaSonic PSU instead.
Cooler
Well the 3600 isn’t worlds hottest CPU so I went for a Cooler Master Hyper 212. This managed to foul my original RAM with stock AMD clips so I had to rotate it 90 degrees (and install a new bracket) and I damaged the fan moving it further up the cooler. Probably should have bought a Noctua NH-D15 which would have kept things chilly and probably a little quieter.
Case
The design is a little older and really could have done with having better cable management.

Case
Okay having just said bad things about the case, after doing some clean up when I changed the PSU I got busy with the cable ties and rotated the panels around so I could have the transparent panel on the right of the case. Since the case is a cube you can rotate the panels with ease. My main motive for this is so I don’t stretch the monitor cables as putting the PC on the left hand side means shorter runs.
PSU
The SeaSonic is a nice fully modular PSU, since I don’t need any disk drives and the SSD mounts into a M2 slot on the motherboard there aren’t too loads of spare cables that I don’t need hanging around in the case.
LEDs and AliExpress
So the motherboard has some ARGB headers and I wanted to fill them. For $30 from AliExpress I got some ARGB strips to put inside the case and a strip of 12V RGB LEDs which are now lighting up my desk.
Motherboard
Honestly I picked this as it was a cheap B550 motherboard with WiFi, it’s been a pretty good pick in my book for a budget board. MSI keep on upgrading the BIOS to support new CPUs and their Dragon Centre software isn’t awful. Setting a custom profile and tuning the fans has made the system pretty quiet unless the CPU is actually doing some work.

GPU
Probably going to upgrade this to an MSI Radeon XT card as this will play nicely with the MSI RGB control software
CPU
I might upgrade to a new Ryzen 5000 part when they’re available.

I haven’t built my own PC for around 10 years and I think I did okay. Apart from the RAM and PSU mistakes everything else has been basically plug and play for the most part. I’m probably going to add some more posts on this PC as I think of them.