Nearly in the home straight now, just the putting the keyboard into the case and adding the key caps to go.

Before fitting the key caps to the keyboard I wanted to put a couple of plate blockers into the gaps on the function key row. I bought these in two profiles from kbrepublic as the cost is fairly low (and the wait for AliExpress shipping can be a while) and I wasn’t sure which I’d prefer. Now annoyingly these don’t come with a washer so I had to make some from thin Plasticard I had, while crude they should stop the aluminium blocks from shorting out the key positions. The supplied nylon screw fits nicely through the MX switch hole. 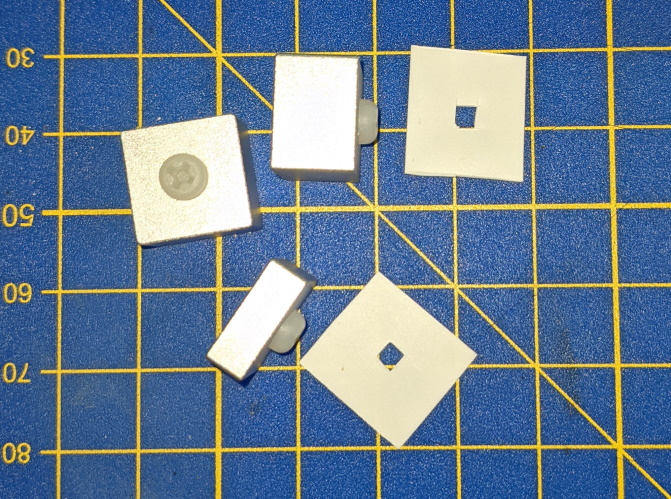 Both profiles of plate blocker with Plasticard washer.

Installing in the case

So after a check that all the lights work and the washers are doing their job it’s time for the final touches.

Lights are on and we’re ready for the case.

So with a phillips #1 screwdriver again I removed the two countersunk screws that held the perspex plate on the back of the case during shipping, placed the keyboard into the case and got busy with the roundhead screws (enlarged in the picture below) fixing the plate to the top. I used a pair of tweezers to get some of the screws into position as doing it by hand was a little fiddly particularly around the USB C connector. 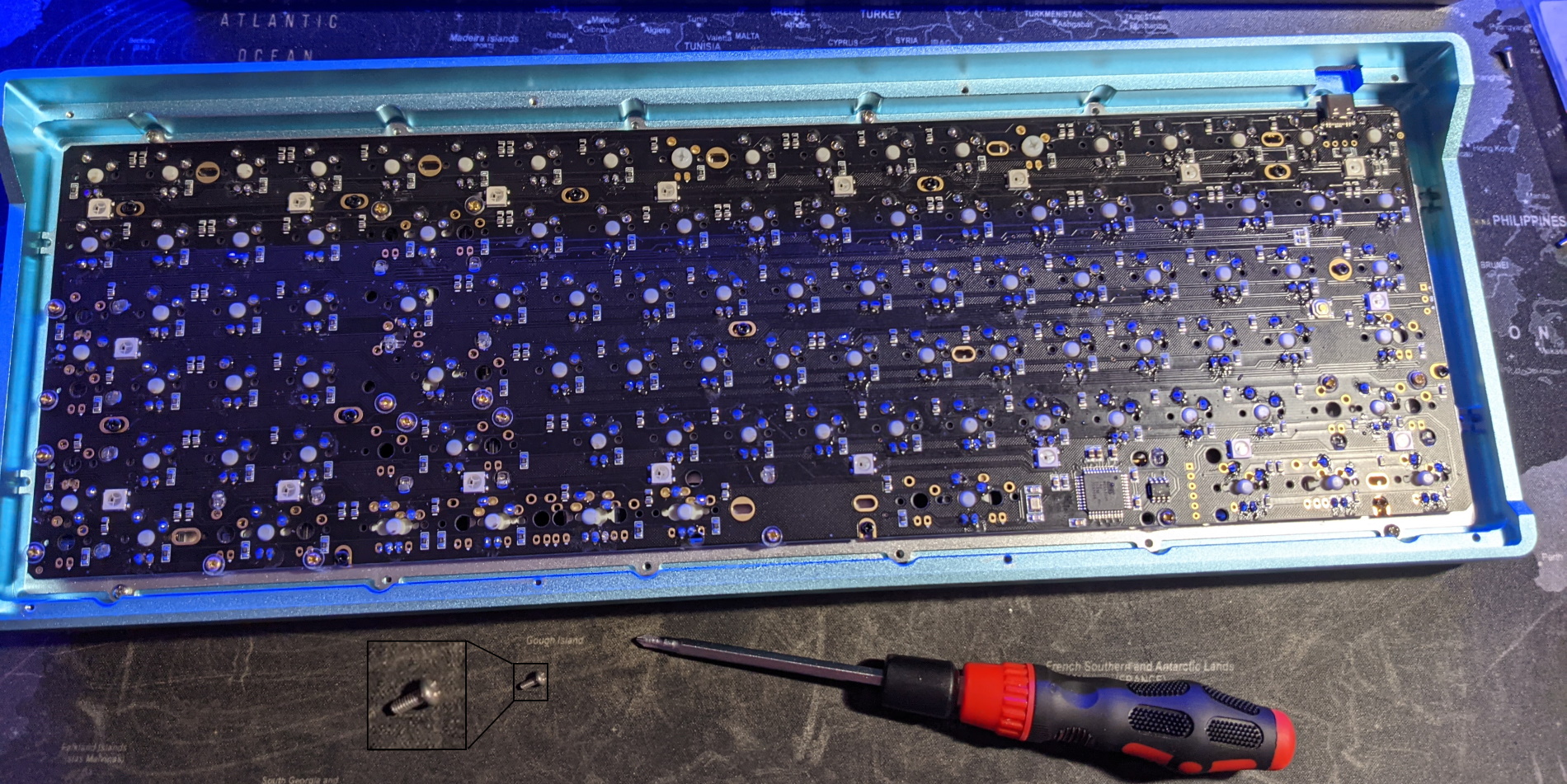 Putting the keyboard in the case.

Next up I screwed the bottom acrylic plate on with the countersunk screws, the keyboard feels surprisingly heavy.

Finishing off with the key caps

Finally it’s time to put the key caps on. The observant might notice that += is upside down.

Key caps are on.

Now a “glamour” shot of the keyboard 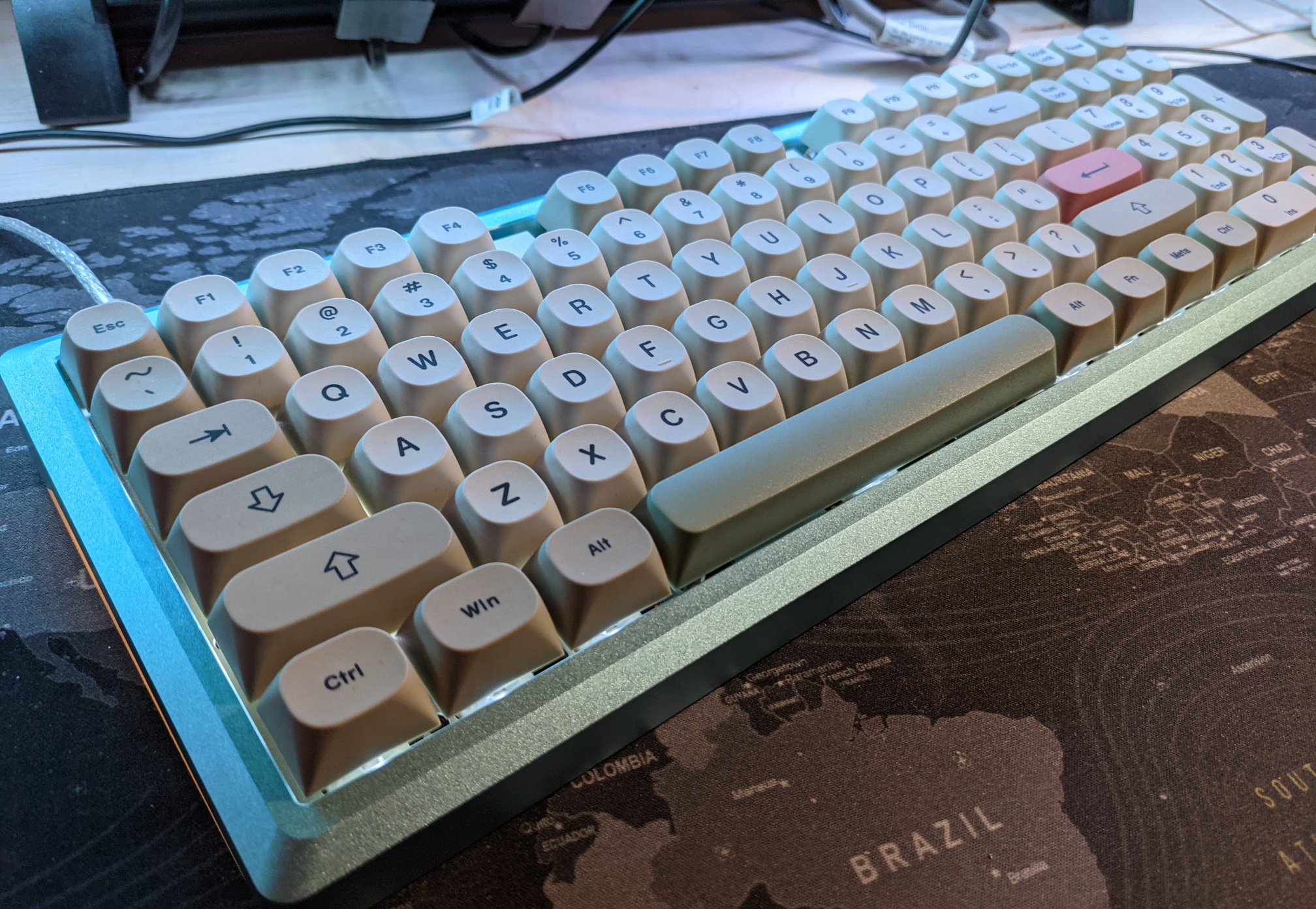 It’s done. This has taken some time to finish I started on Monday 30th November and finished on Thursday 3rd December, the plate blockers arriving on the Wednesday just in time. I guess I probably spent around eight hours assembling and soldering with a lot of time getting the LEDs right.

The issues so far are:

Compiling my own firmware will fix some of these and once I’ve got used to the keyboard the others will go away.

Installing the LEDs for the backlight was a pain, but the results are really worth it. With them on the keyboard positively sparkles. If I was doing it again I probably would go for the led sockets which also lets you swap the LEDs afterwards.